Connectivity in freshwater ecosystems is vital for the lifecycles of many freshwater fish as they move between breeding and feeding areas. The construction of dams and reservoirs has impacted our river systems to the extent that only 37% of rivers longer than 1,000km remain free-flowing over their entire length (Grill et al 2019).

The LPI for migratory freshwater fish was developed to monitor trends fish that live in freshwater habitats either partly or exclusively, which are often impacted by these changes in habitats. This index is suitable as a complementary indicator for Goal A in the post-2020 global biodiversity framework as it can show trends in species populations impacted by reduced or improved connectivity of freshwater habitats. 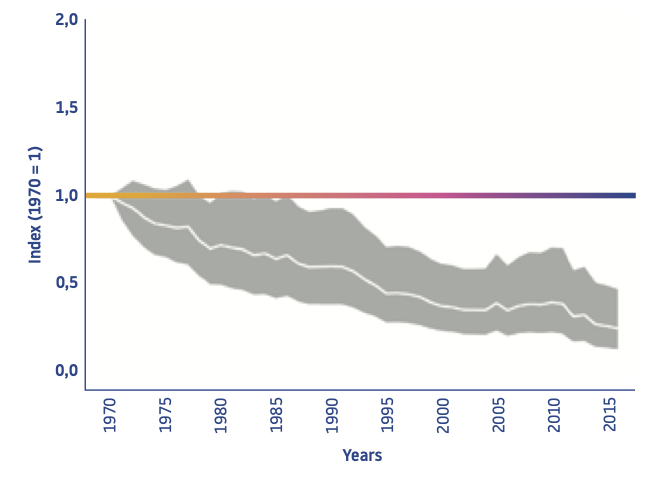 Figure 1. Average change in relative abundance of -76% between 1970 and 2016 of 1,406 monitored populations of 247 species of fishes listed on GROMS as anadromous, catadromous, amphidromous, diadromous or potamodromous. The white line shows the index values and the shaded areas represent the bootstrapped 95% confidence interval (-88% to -53%).

Using threat information for 290 populations, we found that with habitat loss and degradation, in particular barriers to migration routes, accounted for around half of the threats to these populations (Figure 2). This was followed by overexploitation and invasive species and disease.


Indicator produced in collaboration with: