What kind of data?

The data used in constructing the LPI are time-series of either population size, density (population size per unit area), abundance (number of individuals per sample) or a proxy of abundance (for example, the number of nests recorded may be used instead of a direct population count). The table below gives you an idea of what can and can’t be used. 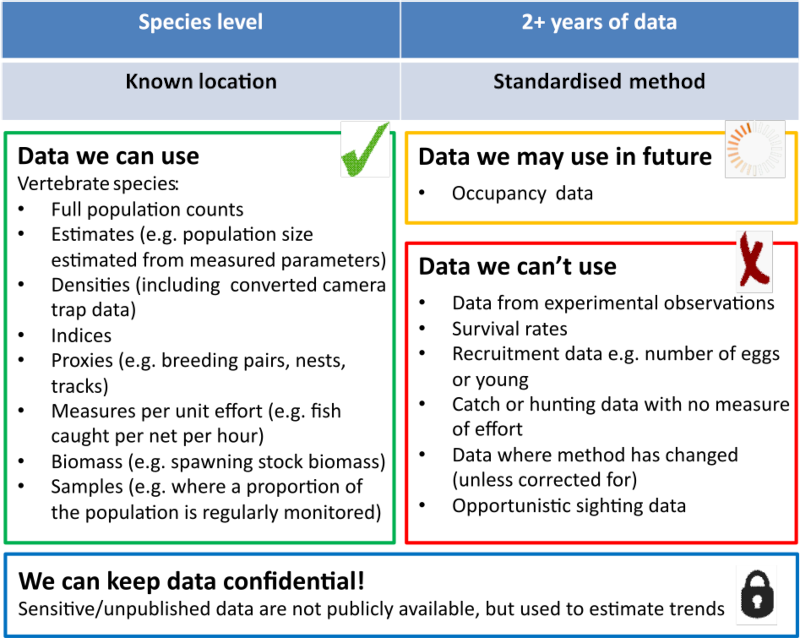 If you have data you would like to contribute to the Living Planet Database, please get in touch with us at LivingPlanetIndex (at) ioz.ac.uk.

What does the LPI indicate?

The headline trend from this Living Planet Report is that globally, monitored populations of birds, mammals, fish, reptiles and amphibians have declined in abundance by 69% on average between 1970 and 2016. But what does this actually mean? Below is a table of what the LPI is and what the common misconceptions are.

Are all species in the LPI declining?

LPI results are calculations of average trends. This means that for the global LPI some populations and species are faring worse than a 69% decline whereas others are not declining as much or are increasing. The average trend calculated for each species in the LPI shows that just over half of reptile, bird and mammal species are stable or increasing. Conversely, the average trend for over 50% of fishes and amphibians species shows a decline.

As the number of species which have positive and negative trends are more or less equal, this means that the magnitude of the declining trends exceeds that of the increasing trends in order to result in an average decline for the global LPI. This also suggests that the global LPI is not being driven by just a few very threatened species, but that there are a large number of species in each group (almost 50%) that together produce an average declining trend.

If we look at trends at the population level, a similar pattern emerges, here amphibians, birds and fish have over 50% of populations showing a negative trend.

What influence do short time-series have on the LPI trend?

The LPI database contains data gathered from different sources and collected at different scales, and not explicitly for the purpose of the analyses presented in the Living Planet Report. It therefore consists of time series of varying lengths (interval between the first and the last observation) and fullness (number of observations over the total number of years). For some species/groups, however, only shorter time-series are available, as shown in the figure below. Whilst time series for birds, mammals and fish are longer, amphibians are almost exclusively represented in the database by shorter time-series. Long-term data are often available for species/groups that are doing better on the whole. We gather all available data in order to detect trends that might be important from a conservation perspective.

To gauge whether the inclusion of these shorter time-series might be skewing the results of the global LPI, we re-calculated the trend excluding short time-series (figure below). Overall, the removal of shorter time-series appears to have little influence on the overall trend. Trends calculated excluding time-series with less than 5 and 10 years of data diverge slightly from the global trend from 2002 and 2003, resulting in declines of 67% and 64.5% respectively. The confidence intervals (not shown here) around these trends overlap with the confidence intervals around the global trend.